Going into this year i had one goal to do a piece I'll be proud of, didn't work out that way last year and this is another chance at doing my own little movie, and i had a few idea's, and here they are

1: the script for last years that wasn't used

'Cookie Revolution, or how i learned to chill and trust the ladies', was the story i was doing for my movie last year it was very dialogue heavy and took up a huge chunk of time and then a computer problem corrupted the digital files and i was two weeks away from failing, and some how managed to save my ass in those two weeks, the story was girl scouts taking over the world and demanding female rule as men have fucked it all up. I liked the idea and the script it made people laugh but after last year i decided i wasn't ready to do this one all over again just yet. 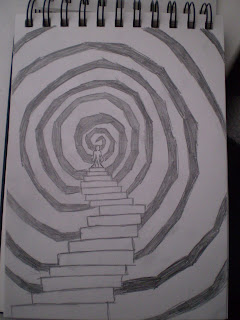 the story is last man on earth, wanders and finds a huge mirror religious symbols all around it and the reflection of a woman in it, the mirror turns out to be a portal to a acid trip inspired world of spinning spirals and long staircases in mid air, at the top the spirals centre leads to a room with two chairs, and the woman sits waiting for last man on earth, she's god and they chat. Thought this one would be to boring visually and reminded me a little of the matrix


3: the cute one that took an evil turn 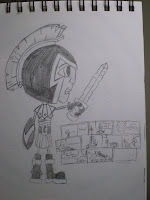 had an idea, boy dresses as roman gladiator, and a head injury leads him to think he really is one and chaos follows, started a very small rough story board that made me realise it was becoming a school massacre so decided no on it 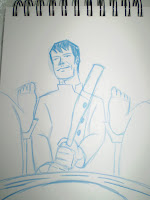 this one i nearly did last year been in my head for ages it's a musical comedy about two back alley abortionists in competition with each other, and the chaos and insanity level with just escalate to the big finale that features some truly disturbing imagery. 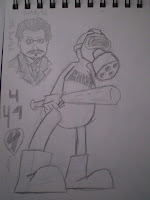 little sketch that became more and more something i could get into and have alot of fun with symbolism and design work from periods that i'm a fan of, uses elements of things i'm into and hopefully will be told in my voice, a love story in a world without love that blossoms into a desire to break the rules and make a statement.
Posted by N Delaney at 4:13 AM